Turning the roof on your Seattle home from drab to amazing takes a certain amount of skill. But ensuring that your roof will last for decades takes care and attention to detail.

At RoofSmart, just being pretty isn’t the goal, and “good enough” is neither good nor enough. So when our Project Managers do a final inspection on a roof, they look past the pretty and down into the nitty-gritty.

This is the story of a roof that looked great but failed at almost every other level and the painful decision we had to make to put things right.

Everyone Deserves A Second Chance

Hiring roofing crews is a different process from what most industries go through. The interview process is much the same at the beginning, but it finishes with hammers in hand and a roof under your feet.

No matter their record or how much knowledge they display, you can’t see the truth of what they tell you until you’ve seen them in action.

The crew that installed the roof in the above image had installed just one other roof for us, which they had to tear off and redo under a Project Manager’s direct supervision.

The roof above was their chance to prove that they could take the re-instruction they received on the first job and apply it to their next.

After all, there’s nothing magical about what we do – we just hold ourselves to higher standards than the rest of the industry.

Everything Looked Great – From A Distance

When they finished the installation – the homeowner was thrilled!

Lucky for them, we don’t go by how happy the homeowner is but by how well we’ve done by the homeowner – and this roof wouldn’t have lasted six months without serious problems cropping up.

In fact, our Project Manager barely needed to leave the ground to see that this crew would never work for us again.

Below is just a sampling of what was found. 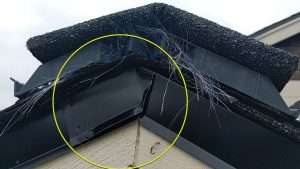 Let’s start with the two pieces of flashing looking like an angry child brought them together.

The strings you see are meant to act as a filter inside the vent. A mere thirty seconds of care would have eliminated this awful look.

Last, we have the vent all cockeyed in relation to the roof’s ridge. This can’t be called an error – it’s pure carelessness. 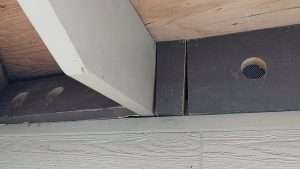 What you see here are called bird blocks. They allow the roof to breathe while keeping birds out.

Each space is the same size as the next, and the pieces are fit to cut on site.

And yet, many blocks were cut either too short or too long. Instead of recutting the blocks to the proper length, the installers just wedged them into place or had filler blocks added with no regard to function or appearance. 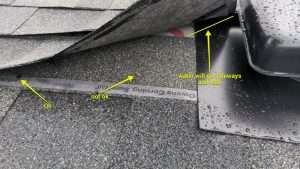 Here we have an improperly installed vent, and moisture has already migrated underneath the shingles with just the first mild rainfall.

A strip of ice shield should be covering the edge of the vent to keep water from running sideways and soaking the paper underneath.

To the left, you can see an obvious feature showing installers where to place their nails, but apparently, it was too subtle for this crew. 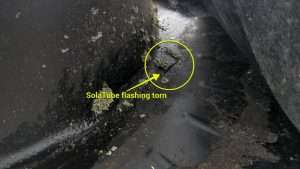 And last, we have a reused pipe boot with an obvious tear that was hidden beneath the shingles.

Just because you can’t see it without lifting a shingle doesn’t mean that water won’t reach it.

This small tear was just one of many potential leaks we found on this highly expensive roof. Unacceptable on every level!

We have some of the highest standards in the roofing world, but they mean nothing without oversight. Remember, this homeowner was ecstatic about how great the roof looked.

Most Seattle roofing companies would have just taken a picture of their smiling face and ran out of there as fast as they could – but not us.

When we inspect a roof, the goal is to find faults – not cover them up or ignore them.

So, we got off the ground and walked the entire roof, lifting shingles and getting close to every detail possible.

After all, roof leaks can be caused by the smallest error.

And this roof was chock full of errors.

Not only did we fire the crew on the spot, but we also tore the roof down and started over with a veteran crew.

Both decisions cost us plenty. We were in the middle of a huge labor shortage, with no replacement crew in sight – and we don’t charge enough to cover installing a roof twice.

But when it comes to right vs wrong, cost doesn’t come into the equation.

Meanwhile, the first crew got hired by a local competitor, and they remain with them to this day.

Because our competitor’s idea of oversight is driving by and looking at the pretty roof – which is sad because, at this point, now even you know better than that, and you’ve likely never even been on a roof, much less installed one.

So if you need a new roof for your Seattle area home and want it installed by a company that knows there is more to roofing than making it look pretty, call us at RoofSmart for a free estimate.